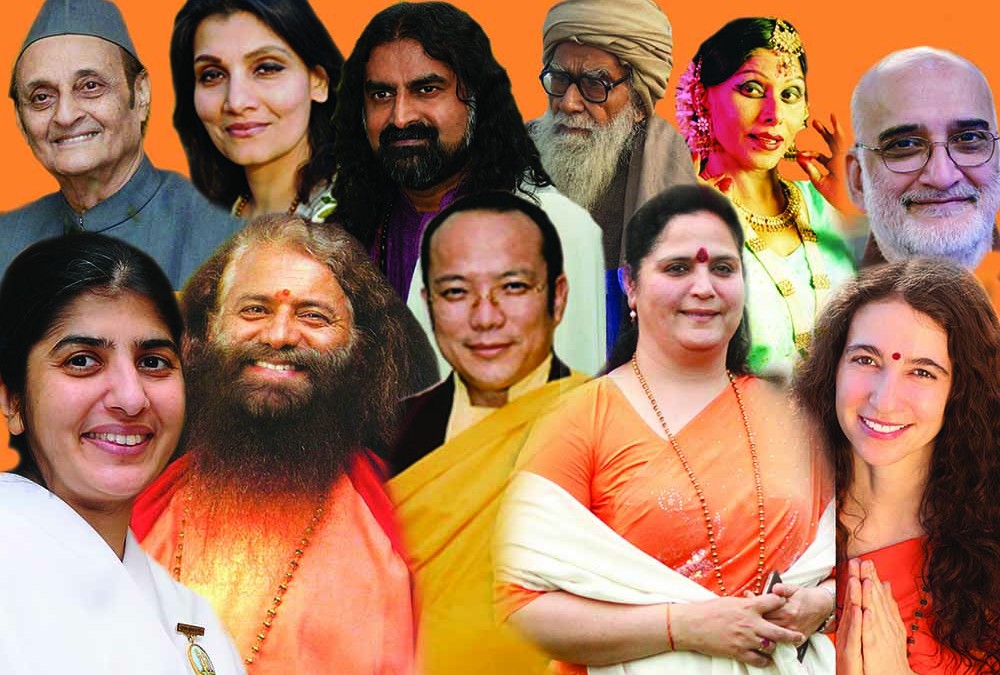 March into the world of enlightenment

On its 20th anniversary, Life Positive Foundation cordially invites you to the mega spectacle of the year – International Festival of Holistic Living 2016 – a much awaited, peerless de rigueur in the capital’s calendar!

Come, exalt in the salubrious company of six erudite masters.

Get enthralled by the iridescence of music and dance in mesmerizing lecture-demonstrations by the scintillating doyens – Dr Shovana Narayan and Shruti Nada Poddar.

Anandmurti Gurumaa is the quintessential Sufi minstrel invoking the divine with her sublime-voiced sufi songs, bhajnas, shabads and kirtans. She is a prolific poet, singer and composer, and a delightful orator with a deep knowledge of Vedanta, Yoga and Ayurveda. Her Rishi Chaitanya Ashram is in Sonepat, Haryana.

Dr Ramesh Lal Bijlani is an Indian author and retired doctor specializing in physiology, nutrition, and yoga. He studied along with the disciples of Sri Aurobindo and The Mother, and began an in-depth study of their works. He was conferred an honorary doctorate (D.Sc.) in Yoga by Swami Vivekananda Yoga Anusandhana Samsthana, a deemed university in Bangalore, India.

Dr Vasant Joshi was initiated into neo-sanayas by Osho and was named Swami Satya Vedant. Osho appointed him as Chancellor of Osho International Meditation University. Dr Joshi has held meditation workshops around the world including at the United Nations, The World Bank, the Pentagon, as well as at Dr Deepak Chopra’s program in San Diego. He presented a unique ecology project, From Garbage to Zen Garden, at the Earth Summit in Rio de Janeiro, created and developed by the Osho International Foundation, Pune.

Kathak exponent Padmashri Dr Shovana Narayan is one of the most recognized faces of the Indian classical performing arts arena. Her dance recitals have included reflections on contemporary sages such as Vivekananda, Ramana Maharishi, Ramakrishna Paramhansa and Mahatma Gandhi.

Shruti Nada Poddar is an educationist, musician, teacher and exponent of traditional Indian knowledge system and philosophy. She also works for the social empowerment and wellness of women youth and ethnic communities. Shruti is an exceptional sound healer.

Mohanji is the founder of Mohanji Foundation which has been spreading his core teaching of liberation from all binding and habits of life for the past many years. His global charities – Ammucare Charitable Trust and ACT Foundation – spread across the world, drive initiatives in education, basic human needs and infrastructure, healthcare and animal welfare. He is an unassuming mystic who has provided practices, such as meditations, Conscious Walking, Consciousness Kriya to accelerate spiritual evolution.

Sister BK Shivani is a Rajyoga Meditation teacher from Prajapita Brahma Kumaris Ishwariya Vishwa Vidyalaya, Mount Abu, for the past two decades. Since 2007, she has been on-screen in India and abroad through the presentation of practical spiritual understanding on the TV programme ‘Awakening with Brahma Kumaris’.

A prominent disciple of Swami Chidanand Saraswati, Sadhvi Bhagawati is the President of the Divine Shakti Foundation, Secretary-General of the Global Interfaith WASH Alliance and Director of the International Yoga Festival. She also heads the administrative processes of Parmarth Niketan Ashram, Rishikesh.

Swami Chidanand Saraswati is a world renowned spiritual leader, visionary and divine guide. Swamiji is president and spiritual head of Parmarth Niketan Ashram, Rishikesh, which is one of the largest spiritual institutions in India. He is also the founder/chairman of India Heritage Research Foundation (IHRF), an international, non-profit, humanitarian foundation.

Rajiv Mehrotra is one of the most prominent disciples of HH the Dalai Lama, having been associated with him for over 30 years. He is the trustee secretary of the Foundation for the Universal Responsibility of HH the Dalai Lama (FURHHDL). He has authored books like The Mind of the Guru, The Spirit of the Muse, Understanding the Dalai Lama.

Maulana Wahiduddin Khan is a noted Islamic scholar and peace activist. He has received, among others, the Demiurgus Peace International Award, under the patronage of the former Soviet President Mikhail Gorbachev; India’s third highest civilian honour, the National Citizen’s Award, presented by Mother Teresa and the Rajiv Gandhi National Sadbhavana Award (2009). He was conferred with the Sayyidina Imam Al Hassan Ibn Ali Peace Award (2015) in Abu Dhabi. He has written several books, including, The Prophet of Peace, Indian Muslims: The Need for a Positive Outlook.

Dr Karan Singh is a prominent face in interfaith dialogues and in eminent conversations revolving around Hinduism and spirituality, hailing from the royal family of Jammu and Kashmir. Dr. Singh has been India’s cultural ambassador on various global platforms propounding the essence of Vedanta and Upanishads.

The present 12th Chamgon Kenting Tai Situpa of the Kagyu lineage of Mahayana Buddhism is a renowned Buddhist master who founded the Palpung Sherabling monastic seat near Baijnath in Himachal Pradesh. Pilgrimage for Active Peace to inspire people to take an active involvement in world peace, interfaith dialogue and interreligious harmony are important aspects of Tai Situpa’s vision. 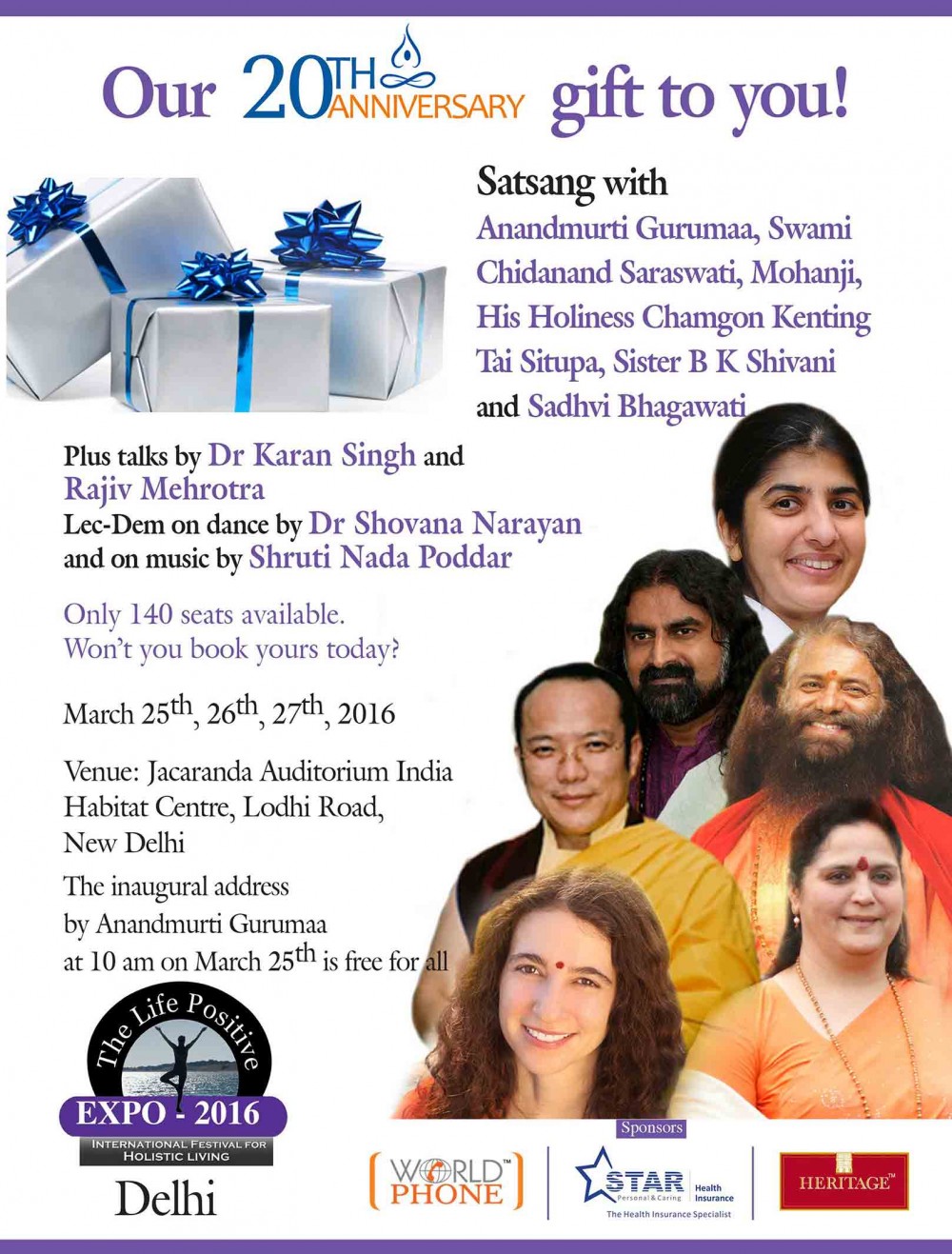